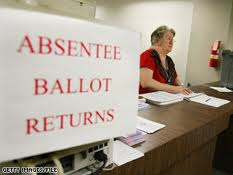 Given the projections for a close presidential race, Florida election law could once again take center stage in the days leading up to and following the election. With that possibility in mind, I will summarize in a series several legal issues that may come into play in November. This third in the series will address challenges to an  Absentee Ballot  Certificate  .

More and more people are taking advantage of the convenience of voting by mail with an absentee ballot.  This method, however, presents the opportunity for voter fraud by those who might use the identity of others to cast a ballot.  To partially guard against this, the outside of an absentee ballot envelope must contain a statutorily mandated statement called a voter certificate.  The voter certificate must be signed by the voter with a signature which matches the signature on file at the supervisor of election’s office.  The Election Code requires that challenges based upon a defect in the voter’s certificate, including authenticity of the signature, be made before the ballot is removed from the envelope.  The challenge must be filed with the local canvassing board and specify the precinct, the ballot, and the reason why the challenger believes the ballot to be illegal. A challenge based upon a defect in the voter’s certificate cannot be accepted after the ballot has been removed from the mailing envelope.  Timeliness is key to maintaining this type of challenge.

Tom Shults is a Florida Bar Board Certified Civil Trial Lawyer. He has represented clients in election and sunshine law issues, complex business and commercial disputes and probate and trust suits. He was admitted to the Florida Bar in 1983 and has maintained an active trial practice in state and federal courts for over 35 years. Mr. Shults successfully represented the Sarasota Alliance for Fair Elections in Sarasota Alliance for Fair Elections et al. v. Browning et al. , where the Florida Supreme Court ruled on the constitutionality of Sarasota County’s charter election law amendments. Mr. Shults has served on the Professional Ethics Committee of The Florida Bar and is the past Chairman of the Code and Rules of Evidence Committee of The Florida Bar. He is a recipient of the Distinguished Community Service Award of the Sarasota County Bar Association for his work with the Sarasota Mental Health Community Centers. In 2013 he was nominated for circuit court judge by the 12th Circuit Judicial Nominating Committee. Mr. Shults has served on the faculty of the Kessler-Eidson Program for Trial Techniques at Emory University School of Law and on the faculty of the National Institute for Trial Advocacy Program for Practicing Lawyers at Nova Southeastern University School of Law. Mr. Shults grew up in St. Petersburg, Florida and is a graduate of St. Petersburg High School (1973), Florida State University (B.S. 1977) and Washburn University School of Law (J.D. cum laude 1982). He is veteran of the United States Army.
View all posts by Thomas D. Shults, Esq. →
This entry was posted in Absentee Ballot, Ballot inspection, Timely Issues Series, Voter fraud and tagged Absentee Ballot, Absentee Ballot Voter’s Certificate, close presidential race, Florida election controversy, Florida election disputes, Florida election fraud, Florida election law, florida election problems, Florida inspect ballots, Florida vote challenges, Florida voting systems, Thomas Shults, Tom Shults, voter fraud, voting by mail. Bookmark the permalink.