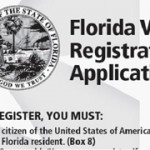 On June 6th, Florida Secretary of State (SOS) Ken Detzner responded to a letter from the United States Department of Justice (DOJ) which called into question the legality of efforts by Florida to remove non-citizens from voter rolls.  The SOS letter included a chain of e-mails, which reflect attempts by Tallahassee begining in September 2011 to obtain access to the U.S. Department of Homeland Security (DHS) database of non-citizens.  The SOS posed four questions in the letter to the DOJ, including whether the DHS has a legal obligation to provide access to the  database, which is known as the Systematic Alien Verification for Entitlements (SAVE).  Comments made by the DHS in the Federal Register, as well as in a DHS handbook on SAVE, say that the SAVE database can be used by states “. . .  for any legal purpose such as background investigations and voter registration”.

Questions remain concerning the background to this controversy. For instance, why  didn’t Florida start the citizenship review process before September, 2011? Even under the best of circumstances the state may not have allowed enough time to complete the process given the time consuming procedures for removing anyone from the rolls and the mid-May, 2012, deadline to complete the process contained in the National Voter Registration Act. Also, why did the DHS  not permit access to the SAVE database last September, and why has the DHS  never in the over 8 months since last September responded with either a yes or no to Florida’s request to use the database?

Tom Shults is a Florida Bar Board Certified Civil Trial Lawyer. He has represented clients in election and sunshine law issues, complex business and commercial disputes and probate and trust suits. He was admitted to the Florida Bar in 1983 and has maintained an active trial practice in state and federal courts for over 35 years. Mr. Shults successfully represented the Sarasota Alliance for Fair Elections in Sarasota Alliance for Fair Elections et al. v. Browning et al. , where the Florida Supreme Court ruled on the constitutionality of Sarasota County’s charter election law amendments. Mr. Shults has served on the Professional Ethics Committee of The Florida Bar and is the past Chairman of the Code and Rules of Evidence Committee of The Florida Bar. He is a recipient of the Distinguished Community Service Award of the Sarasota County Bar Association for his work with the Sarasota Mental Health Community Centers. In 2013 he was nominated for circuit court judge by the 12th Circuit Judicial Nominating Committee. Mr. Shults has served on the faculty of the Kessler-Eidson Program for Trial Techniques at Emory University School of Law and on the faculty of the National Institute for Trial Advocacy Program for Practicing Lawyers at Nova Southeastern University School of Law. Mr. Shults grew up in St. Petersburg, Florida and is a graduate of St. Petersburg High School (1973), Florida State University (B.S. 1977) and Washburn University School of Law (J.D. cum laude 1982). He is veteran of the United States Army.
View all posts by Thomas D. Shults, Esq. →
This entry was posted in Election contests, Florida Voting Issues, News, Voter challanges, Voter fraud, Voter registration and tagged florida election attorney, Florida election contest, Florida election controversy, Florida election disputes, Florida election fraud, Florida election law, Florida election lawsuit, florida election problems, Florida election suit, Florida right to vote, Florida vote challenges, florida voter purge, florida voter registration law, non-citizens vote florida, Thomas Shults, Tom Shults, voter registration. Bookmark the permalink.