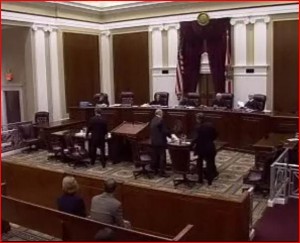 In a 5-2 decision the Florida Supreme Court on April 27 2012 approved the legislature’s second attempt to redraw the state senate district map. The court previously rejected the senate map, forcing the state legislature to reconvene to redraw the map. Justice Perry, joined by Justice Quince, dissented from the majority as to District 8, a historically black district which was split by the new map. Perry concluded “Because I would find that Redrawn District 8 is noncompact, does not follow consistent geographic and political bounties, and splits Daytona Beach to the detriment of black voters and diluting their minority voting power and influence, I dissent to that portion of the majority‘s decision.”
The remaining hurdle to the state senate and house maps is a review by the U.S. Department of Justice to determine if the maps violate the federal Voting Rights Act or impair minority voting rights in five counties with a history of discrimination: Hillsborough, Monroe, Hendry, Collier and Hardee.

The opinion can be read here.

Tom Shults is a Florida Bar Board Certified Civil Trial Lawyer. He has represented clients in election and sunshine law issues, complex business and commercial disputes and probate and trust suits. He was admitted to the Florida Bar in 1983 and has maintained an active trial practice in state and federal courts for over 35 years. Mr. Shults successfully represented the Sarasota Alliance for Fair Elections in Sarasota Alliance for Fair Elections et al. v. Browning et al. , where the Florida Supreme Court ruled on the constitutionality of Sarasota County’s charter election law amendments. Mr. Shults has served on the Professional Ethics Committee of The Florida Bar and is the past Chairman of the Code and Rules of Evidence Committee of The Florida Bar. He is a recipient of the Distinguished Community Service Award of the Sarasota County Bar Association for his work with the Sarasota Mental Health Community Centers. In 2013 he was nominated for circuit court judge by the 12th Circuit Judicial Nominating Committee. Mr. Shults has served on the faculty of the Kessler-Eidson Program for Trial Techniques at Emory University School of Law and on the faculty of the National Institute for Trial Advocacy Program for Practicing Lawyers at Nova Southeastern University School of Law. Mr. Shults grew up in St. Petersburg, Florida and is a graduate of St. Petersburg High School (1973), Florida State University (B.S. 1977) and Washburn University School of Law (J.D. cum laude 1982). He is veteran of the United States Army.
View all posts by Thomas D. Shults, Esq. →
This entry was posted in Florida Voting Issues, News, Redistricting and tagged fair districts, florida election attorney, Florida election law, florida election lawyer, florida election problems, florida supreme court, redistrict, redistricting florida, redistricting maps, Thomas Shults, Tom Shults. Bookmark the permalink.