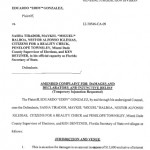 The race for Miami/Dade’s State Representative District 111 seat has resulted in a lawsuit filed by a candidate against his Republican primary opponent.  Eduardo “Eddie” Gonzalez, an incumbent state representative, recently sued his primary opponent Maykel “Miguel” Balboa, and several others allegedly connected with the Balboa campaign, for intentional infliction of emotional distress and defamation.  The lawsuit also asks the court to order removal of Balboa’s name from the August 14th primary ballot.  Among other allegations, the suit states that a political consultant for Balboa recorded a widely distributed robocall message which falsely stated that Gonzalez was being investigated for absentee ballot fraud, and that he does not have the support of U.S. Senator Marco Rubio.  As of August 6th, Balboa has not responded to the suit and no hearing has been set by the court on Gonzalez’s claims.

Tom Shults is a Florida Bar Board Certified Civil Trial Lawyer. He has represented clients in election and sunshine law issues, complex business and commercial disputes and probate and trust suits. He was admitted to the Florida Bar in 1983 and has maintained an active trial practice in state and federal courts for over 35 years. Mr. Shults successfully represented the Sarasota Alliance for Fair Elections in Sarasota Alliance for Fair Elections et al. v. Browning et al. , where the Florida Supreme Court ruled on the constitutionality of Sarasota County’s charter election law amendments. Mr. Shults has served on the Professional Ethics Committee of The Florida Bar and is the past Chairman of the Code and Rules of Evidence Committee of The Florida Bar. He is a recipient of the Distinguished Community Service Award of the Sarasota County Bar Association for his work with the Sarasota Mental Health Community Centers. In 2013 he was nominated for circuit court judge by the 12th Circuit Judicial Nominating Committee. Mr. Shults has served on the faculty of the Kessler-Eidson Program for Trial Techniques at Emory University School of Law and on the faculty of the National Institute for Trial Advocacy Program for Practicing Lawyers at Nova Southeastern University School of Law. Mr. Shults grew up in St. Petersburg, Florida and is a graduate of St. Petersburg High School (1973), Florida State University (B.S. 1977) and Washburn University School of Law (J.D. cum laude 1982). He is veteran of the United States Army.
View all posts by Thomas D. Shults, Esq. →
This entry was posted in Candidate qualifications, Election contests, Litigation Updates, News and tagged Eduardo “Eddie” Gonzalez, Flordia election controversy, florida election attorney, Florida election disputes, Florida election law, Florida election lawsuit, florida election lawyer, Florida election suit, intentional infliction of emotional distress, Maykel “Miguel” Balboa, State Representative District 111, Thomas Shults, Tom Shults. Bookmark the permalink.