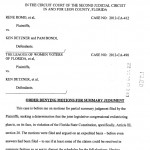 Unlike the redistricting of state legislative districts, there is no automatic review by the Florida Supreme Court of the Legislature’s redistricting of congressional districts.  Challenges to congressional redistricting can, however, be made by filing suit in the state circuit court.  In the case of The League of the Women Voters v. Detzner  pending in the Leon County Circuit Court several plaintiffs alleged that the congressional redistricting plan violates the Fair Districts Amendments of the Florida State Constitution, Art. III, Section 20.  The plaintiffs recently requested that the court enter a summary judgment declaring the new redistricting map invalid. Alternatively, the plaintiffs sought a temporary injunction prohibiting use of the new redistricting map pending resolution of the case.  On April 30, 2012, the trial court denied both requests.  In doing so the court observed that “despite plaintiffs’ protest to the contrary, the new map appears on its face to be an improvement over the one it replaces.  For these reasons, I decline to enjoin use of the challenged map while these cases are pending.”

Although the court order does not bode well for the plaintiffs, it does not determine with finality the plaintiffs’ challenge to congressional redistricting. Further proceedings in this case will be necessary and a final determination will likely not occur until after the November elections.

Tom Shults is a Florida Bar Board Certified Civil Trial Lawyer. He has represented clients in election and sunshine law issues, complex business and commercial disputes and probate and trust suits. He was admitted to the Florida Bar in 1983 and has maintained an active trial practice in state and federal courts for over 35 years. Mr. Shults successfully represented the Sarasota Alliance for Fair Elections in Sarasota Alliance for Fair Elections et al. v. Browning et al. , where the Florida Supreme Court ruled on the constitutionality of Sarasota County’s charter election law amendments. Mr. Shults has served on the Professional Ethics Committee of The Florida Bar and is the past Chairman of the Code and Rules of Evidence Committee of The Florida Bar. He is a recipient of the Distinguished Community Service Award of the Sarasota County Bar Association for his work with the Sarasota Mental Health Community Centers. In 2013 he was nominated for circuit court judge by the 12th Circuit Judicial Nominating Committee. Mr. Shults has served on the faculty of the Kessler-Eidson Program for Trial Techniques at Emory University School of Law and on the faculty of the National Institute for Trial Advocacy Program for Practicing Lawyers at Nova Southeastern University School of Law. Mr. Shults grew up in St. Petersburg, Florida and is a graduate of St. Petersburg High School (1973), Florida State University (B.S. 1977) and Washburn University School of Law (J.D. cum laude 1982). He is veteran of the United States Army.
View all posts by Thomas D. Shults, Esq. →
This entry was posted in Litigation Updates, News, Redistricting and tagged fair districts, florida congressional districts, florida election attorney, Florida election controversy, Florida election disputes, Florida election law, Florida election lawsuit, florida election lawyer, florida election problems, Florida election suit, redistrict, redistricting florida, redistricting florida litigation, redistricting maps, Thomas Shults, Tom Shults. Bookmark the permalink.