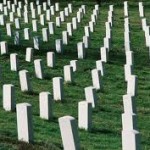 First came the news that thousands of non-U.S. citizens are registered to vote in Florida.  Now comes the story that approximately 53,000 dead people are listed as registered voters in the state.  Under a law recently passed by the legislature, state officials were able to compare social security information with the statewide list of registered voters and apparently found that approximately 53,000 dead people are registered voters.  According to this AP story, the Division of Elections has informed the elections supervisors that they have seven days to remove the dearly departed from their voter roles.   Stay tuned.